From the July 2018 issue of Acoustic Guitar | BY JANE MILLER

When you see the suffix -sus in a chord, as in Dsus4 or Dsus2, how do you know what to play? The sus is short for suspended and it’s telling you to replace the third of a chord with the fourth or second. Since the third of a chord is the note that indicates major (natural third) or minor (flatted third), suspended chords have an ambiguous sound. This open-ended quality can lend interest and tension to music. Sus chords are also great—and diverse—tools for dressing up otherwise plain progressions.

In this lesson, you’ll look at some sus-chord symbols commonly seen in popular music and learn how to play them on guitar. But first, it’s important to understand the construction of chords so that you are able to find the third and replace it with the indicated note. Major triads have three notes: the root, the third, and the fifth. Start with the name of the chord, such as D major, and call that root note 1 (D). Take the third and fifth notes of the major scale of the same name—in this case, D major (D E F# G A B C#)—and you have a D major triad: D (1) F# (3) A (5).

In context, a suspended chord often resolves to the major triad with the same root note. This familiar sound, similar to what Carly Simon played in “Anticipation” or what’s heard in Crosby, Stills, Nash & Young’s “Carry On,” is shown in Example 2 with the progressions Dsus4–D and Asus4–A. To play the first two bars, start with a basic open-D chord grip and, keeping that shape depressed, add your fourth finger to the fourth-fret G. Then, to resolve to the D chord, lift your fourth finger from string 1, as the D chord’s third is pre-fretted. Similarly, in bar 3, fret an open-A chord with your first, second, and third fingers, and grab the fourth (D) of the Asus4 chord (A D E) with your
fourth finger, this time on string 2.

A good way to learn new chords from ones you already know is to write out note names across the top of a chord diagram, like D A D F# for an open D chord. Then, at the bottom of the diagram, label the function of each note, such as 1 5 1 3. That way, you can easily locate the third and replace it with a suspension.

Pay special attention to the E and A chord forms in these examples. All of these fingerings will work with barre chords, making them moveable and easy to transpose to any root. Example 6 uses the E forms for a Bb7sus4-to-Bb7 move and the A forms for an Eb7sus4–Eb7 progression, all with a sixth-fret barre.

Give yourself extra time to learn barre chords if they’re new to you. The sweet spot for any fretted note is close behind the fret; aim for getting your first finger straight across all six strings in this location. For even pressure, practice rolling your first finger back so that you’re using the side of the finger that is closest to your thumb.

You might recognize another suspended chord type—sus2—from popular music. The Police’s “Message in a Bottle” is but one of many good examples of this chord in action. And you might already be using a sus2 when you add decorative hammer-ons and pull-offs to a D or A chord.

Just as in a sus4 chord, a sus2 replaces the third—this time, as the name indicates, with the second. Play a D major triad and let go of your second finger, and you’ll have a Dsus2 chord (Example 7). The note that you’ve taken away is F#; the note that you’ve replaced it with is E, or the open first string. It works just as easily for the A major chord when you lift your third finger, leaving the B string (the chord’s second) open and taking away the C# (third). (Note that this is different from an add9 chord, which contains both the ninth/second and the third.)

Move the Asus2 form around the neck freely using a barre and finding the root on the fifth string. Need a C#sus2 chord? No problem—use a fourth-fret barre, as shown in Example 8. The Dsus2 form can be moved around as well, by making a half-barre with the root of the chord on the fourth string. Play it with your first finger at fret 2, and you’ve got the Esus2 shown in bar 2.

A Csus2 chord (Example 9) can be thought of as a basic open-C shape with the second finger omitted and the chord’s second (D) played on the open fourth string. To avoid accidentally hitting the open first string (E), you can double the open G at the octave on string 1 with your fourth finger, as in bar 2.

A good rule of thumb for the sus2 barre chords shown—and for most chords, in fact—is this: skip a fret, skip a finger. So, skip your second finger and use your third and fourth fingers to play the chord forms when they begin two frets above the first-finger barre.

For extra color, try adding a ninth to any 7sus4 chord. For instance, barre the third fret with your first finger across strings 5–1 to get the C9sus4 (Example 10). This particular voicing, spelled lowest note to highest, is C (1) F (4) Bb (b7) D (9). If you’d like, omit the chord’s fifth, the third-fret G, as this note is inessential to the sonority.

Make an E9sus4 chord by playing a standard Bm7 barre chord at fret 2 and adding the low open E as the bass note. Notice that the ninth, F#, does double duty on strings 4 and 1. If you’d prefer to double the root (E) instead, lift your third finger to reveal the E on string 4, fret 2. Example 11 shows both options.

A Gsus4 chord presents a problem that can be solved by blocking the fifth string, as notated in Example 12. If you want to play a G7sus4, fret the flatted seventh (F) on string 4 with your fourth finger and block the first string. One more step makes a jazzy-sounding G9sus4; just add your second finger to string 3, fret 2, giving you the ninth (A).

If you isolate the upper three notes of that G9sus4 chord, you’ll discover an F major triad (F A C). So G9sus4 could also be called F/G—an F triad with G in the bass. This formula gives you another moveable shape: any major triad played with a bass note that is a whole step higher than the root of the triad creates a 9sus4 chord.

Finally, use your ears and taste to incorporate some suspended chords into your own playing, songwriting, and arranging for guitar. In Example 14, you’ll find a short piece, “Blue Suspenders,” which demonstrates how you might integrate these harmonies with other chord types. As you get to know these fingerings, your ears will become accustomed to the sound of suspended chords and you’ll find yourself working them into your playing naturally.

You can get up and running pretty quickly with A9sus4 and D9sus4 chords by taking advantage of open strings that fit these chords. When you play the open strings 5–1—A, D, G, B, and E—you’ve got an A9sus4 chord. When you add the C on string 2, fret 1, and strum strings 4–1, you get D G C E, which is D9sus4 without the fifth (A).

Take it to the Next Level

Once you’ve completed this lesson, try resolving 9sus4 chords, just like you did with triads. You might take it even further and flatten the ninth, creating a more urgent need for resolution. For example, play A9sus4, turn it into A7b9, and resolve it to either a D major- or D minor-type chord. The voicings in this example are all moveable and therefore easily transposed. Call any dominant chord V and count down to I to land on the home chord. 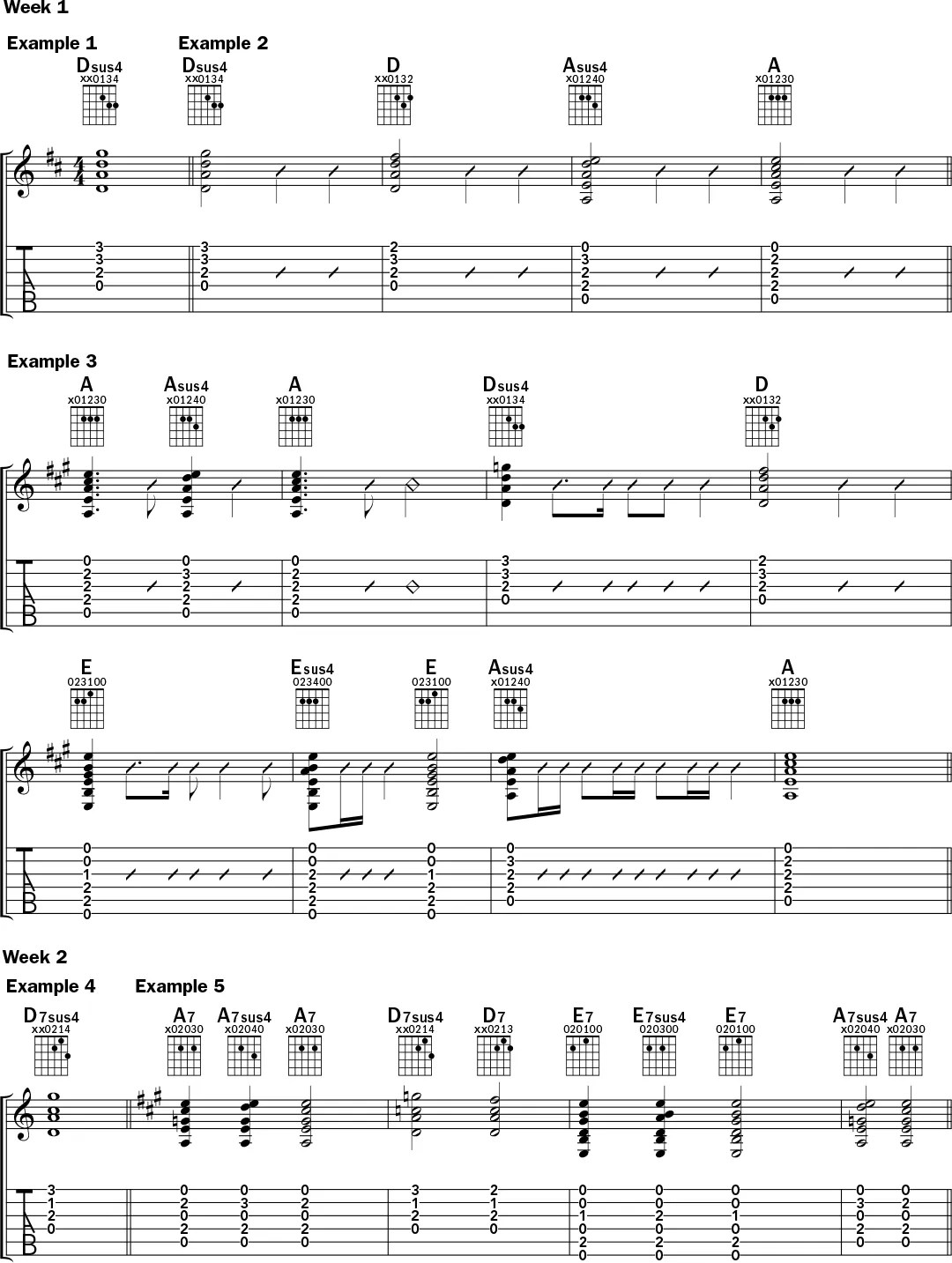 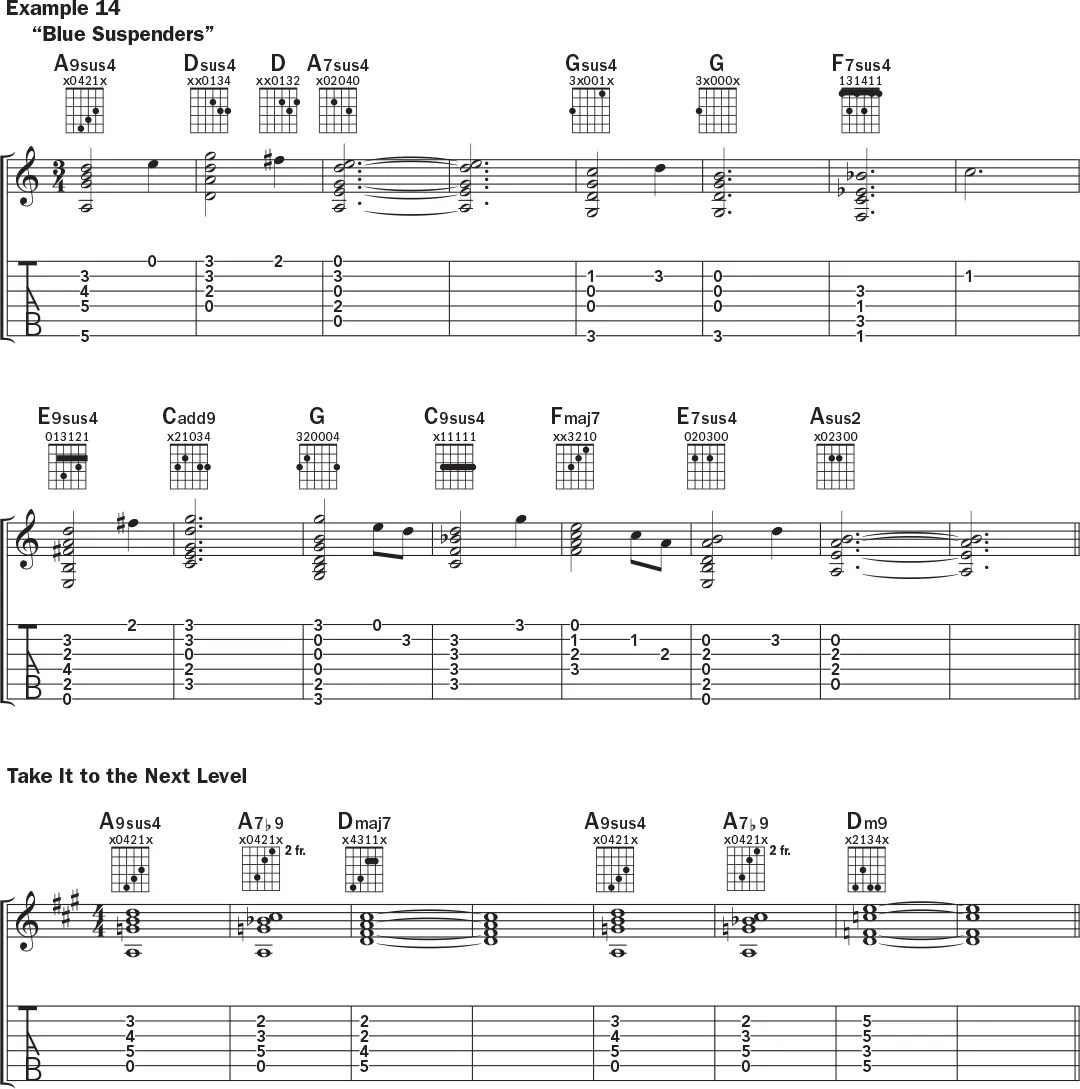 Jane Miller, a professor of guitar at Berklee College of Music, has performed and presented master classes around the world. She is the author of Introduction to Jazz Guitar (Berklee Press/Hal Leonard, 2015). janemillergroup.com 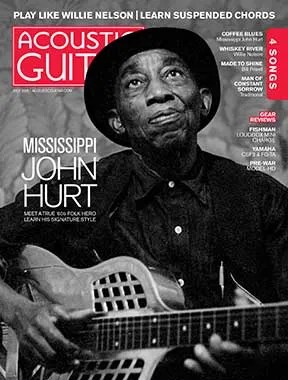 This article originally appeared in the July 2018 issue of Acoustic Guitar magazine.

This site uses Akismet to reduce spam. Learn how your comment data is processed.